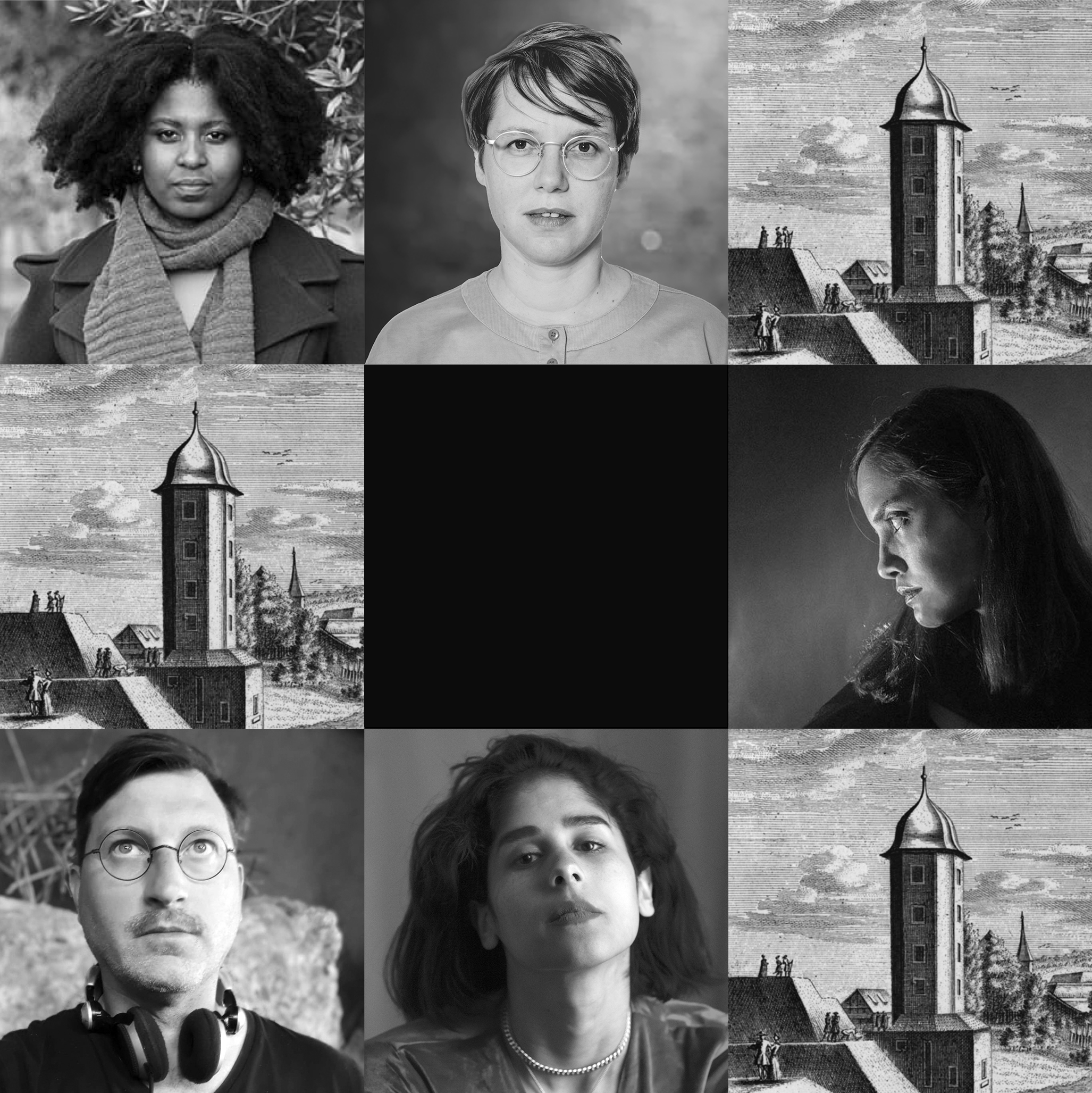 Playlist of the tracks in the installation at Wasserturm, Zurich

Like an architectural flute hiding in the urban fabric of the city of Zurich, the ancient water tower once again comes alive with the sound installation The Whistle. The work is a site-specific intervention by the VACUT collective (Voices Against Corruption and Ugly Trading), initiated by Gilles Aubry in collaboration with Ale Hop, Aya Metwalli, Gabi Motuba and Sabina Leone. For the third project of OTO SOUND MUSEUM curated by Zaira Oram at this place, the voices of The Whistle pass through the silent body of the tower to interrogate the near and distant realities which we live in.

The installation The Whistle features voice recordings presented inside the Wasserturm, water tower in Zurich, audible from the surrounding public space. Informed by data leaks and NGO reports highlighting Switzerland's involvement in international money laundering, tax evasion, and predatory extraction of raw materials, the work seeks to address the affective cost of racial capitalism from a situated perspective. The VACUT Group (Voices Against Corruption and Ugly Trading) was formed to this end, gathering sound artists and musicians from countries involved in dubious business activities with the alpine nation.

The work relies on voice as an embodied manifestation of perceived social and environmental injustice. Each performer engages with a number of sources documenting corruption, land grabbing, human exploitation and environmental devastation in their home countries, along with their own perception of such phenomena. They respond to this experience through vocal improvisations in the course of recorded sessions. Assembled into a composition, the voices blend with the local ambient sound in Zürich. For the visitors, listening becomes a matter of participation, empathy and accountability, an invitation to attend to one's boundedness to near and distant realities.

The project further interrogates existing acoustic representations of Swissness, a term rebranded in the 1990s for marketing purposes, largely associated with attributes of fairness, precision, reliability, political stability, naturalness and cleanliness. An early example of Sonic Swissness can be found in the composition “Symphonie Les Echanges” by Rolf Liebermann, created for the 1964 Swiss national exhibition in order to introduce the visitor to the interaction of the economy in a novel way. Another instance can be found in the Sound Tower installed in Bienne by Andres Bosshard for Expo.02. Essentially a streaming dispositive for immersive aural experience, Bosshard's Klangturm offers a perfect metaphor for neoliberal soundscaping—smooth, consumption-oriented, and depoliticized. Following the rejection of the Responsible Business Initiative by a majority of Swiss voters in 2020, conversations on Sonic Swissness certainly deserve an update. This imperatively should include voices from Switzerland's partner countries, who can attest of the actual human and environmental cost of Swiss wellbeing.
VACUT Group members: Ale Hop (voice artist); Aya Metwalli (voice artist); Gabi Motuba (voice artist); Gilles Aubry (composer and project initiator); Sabina Leone (voice artist).

Sources used for the Whistle project

On the « Suisse Secrets » data leaks and investigation

Suisse Secrets: Banks have learned nothing from their mistakes, transparency.org, 2022

On Switzerland as biggest commodities trading hub in the world


On Swiss invovlvement in the world's Gold industry


Other dubious Swiss business activities on the world market

Banned in Europe: How the EU exports pesticides too dangerous for use in Europe, Laurent Gaberell and Géraldine Viret, publiceye.ch, 2020


Switzerland’s bilateral agreements to offset their emissions set a poor precedent for ambition ahead of cop26, newclimate.org, 2021


OTO SOUND MUSEUM is a nomadic museum that produces, presents and collects sound works by contemporary artists from different backgrounds, geographies and generations. The museum was born digitally as an iconoclastic environment and a utopian architecture on the platform. It is also used to travel across different places in the physical realm, transforming its identity along the way.

ZAIRA ORAM is a curatorial collective focused on experimental displays and interdisciplinary projects. Her practice involves research on visual art, performance and sound art and the creation of networks between different disciplines and areas of studies. Her main research threads are migration, contemporary narrative and border experiences. Zaira Oram has an open identity: she travels and transforms herself. The collective was initiated by Francesca Ceccherini and Eleonora Stassi, and expanded with the participation of Chloé Dall’Olio, Camille Regli and Elisa Bernardoni.

Alejandra Cárdenas Pacheco (also known as Ale Hop) is a Peruvian-born artist, researcher, and experimental musician based in Berlin. She began her career in the 2000s in Lima’s experimental and underground scene. In 2012, following several years of taking part in different pop and electronic bands, she finally started her solo project, in which she builds layers of sounds by blending a complex repertoire of electric guitar techniques processed by synthesis devices, to create a music of deep physical intensity. Furthermore, she co-founded the Berlin-based festival Radical Sounds Latin America (of which she was co-curator from 2019-21) and, nowadays, directs the publication Border-Listening/Escucha-liminal and the editorial platform Contingent Sounds, which facilitate critical discourses, and artistic research on listening.
https://alehophop.com/

Aya Metwalli is an Egyptian singer, composer and music producer. She started singing at the age of five, learned the piano in her early childhood and started writing songs on a self-taught acoustic guitar in her early adulthood. She studied music production in 2014 and has been experimenting with voice and synthesizers since.
https://soundcloud.com/ayametwalli

Gabi Motuba is a South African award-winning jazz vocalist and composer. She studied jazz music at Tshwane University of Technology (TUT) and received her diploma in 2013. In 2019, Gabi Motuba returned to TUT to complete her B Tech in jazz music majoring in Jazz Improvisation.
https://gabimotuba.com/

Gilles Aubry is a Swiss artist, musician and researcher based in Lausanne and Berlin. He holds an MA in Sound Art from the Berlin University of the Arts (UDK) and a PhD in social anthropology from the Bern University. His work engages with sound, technology and environmental voices in relation to power and coloniality in various contexts.
http://www.earpolitics.net/

Sabina Leone is a Swiss vocalist and musician based in Zürich. In her new project Héloïse Sabina Leone acts as a solo performer and creates musical images with expressive voice, drums and various percussion instruments. Sabina Leone builds on her long experience as a singer songwriter (solo album Mancare, 2007), with theater productions (Eusi chlii Stadt with Big Zis, Theater am Hechtplatz 2009 and Soirée, created by Alexandra Bachzetsis et al., Theaterhaus Gessnerallee 2008) and with bands such as Sabina Leone & Teké Ensemble, the duo Sorelle Leone and the female band Wemean, a snotty girl band that released an album in 1996 and toured throughout Europe and Cuba.
https://www.instagram.com/sabina__leone/